Cicadas are members of the Insect order Homoptera. Other insects in the same order are Aphids, Scale Insects, Leafhoppers, Treehoppers and the way-cool Froghoppers (also known as Spit Bugs!). Homopterans have a short, piercing/sucking mouthpart which resembles a hypodermic needle and their wings are clear for their entire length. Cicadas use their mouth to suck sap. The forewings of the similar Hemiptera, or True Bugs, have a thickened base. (Some authorities place these two groups as suborders within the order Heteroptera.) Both the Homoptera and the Hemiptera have incomplete metamorphosis, where the egg hatches into a nymph that grows through several stages called instars until it finally transforms into the adult stage. Adults are reproductive and may be recognized by the presence of wings. There are over 160 species of cicada in North America north of Mexico. They come in many different sizes. Some are found in prairies and others are found in woodlands.

Cicada nymphs burrow underground and feed on sap from plant roots. The length of time they spend in this subterranean existence varies from 2 to 17 years, depending on the species. The nymphs have large, muscular front legs for all this digging, as you can see in the picture. 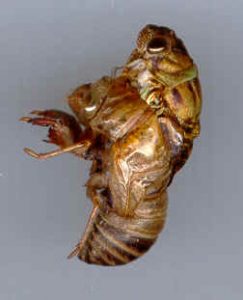 When they are ready to become adults, the nymphs tunnel to the surface and crawl up on the side of the nearest object. Then the skin splits down the middle of their back and they emerge to inflate and dry their wings. This is done at night.

Pictured at left is a cicada which died as it tried to come out of its larval shell. It was found on the side of a tree just as you see it!

The length of time most cicadas spend underground varies from 2 to 5 years, so some emerge every summer. One of the common annual, tree-dwelling cicadas is also known as the Dog Day Cicada, because they are active in the "Dog Days" of late summer when the star Sirius is prominent in the night sky. Sirius is the brightest star in the sky and is part of the Big Dog (Canis Major) constellation, which may be seen in the southeast quadrant of the sky in the northern hemisphere. Dog Day Cicadas are about 1 3/4 inches long.

The following sequence of photos shows the emergence of a Dog Day Cicada one night in the summer of 2010. The photos were taken by Jim Dolbee and are used here by permission. One hour and 23 minutes elapsed from the time it broke through its larval shell to the last photo shown. Notice how the colors of the adult exoskeleton don't appear right away. 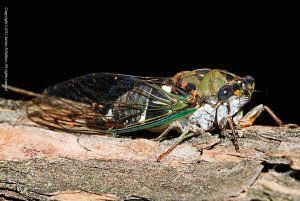 How do they make all that racket? On the underside of the abdomen at the front are two stiff membranes called tymbals. If you turn a male on its back you will see two shield-like structures just under the hind legs. The tymbals are underneath these structures. They have a special muscle attached to them and by rapidly contracting and relaxing the muscle - up to 400 times per second! - the tymbal is "popped" back and forth, much like pushing down and then releasing the top of an empty pop can. The cicada's special muscle gets tired after a while and the insect then stops to rest. This is what happens when you hear the buzz of a cicada sputter to a halt. Each species of cicada has a distinct song. Visit the Cicadas of Michigan web site to hear 10 different species of cicada.

The cicada chorus serves to attract the females. This is a risky business for the male because it advertises his presence to predators also! And there are LOTS of predators of cicadas. Many species of birds, including such large raptors as the Swainson's Hawk (Buteo swainsoni) and the Mississippi Kite (Ictinia mississippiensis), eat cicadas every chance they get. As you might guess by their lack of bright colors, cicadas do not have any special defense other than camouflage or flying away from danger. By emerging in great numbers over a short period of time, they succeed by overwhelming the predators with choices. Enough will always survive to ensure the production of the next generation.

After mating, the female woodland cicadas use their specially modified ovipositors to cut short slits in the twigs of the trees they are in. They lay their eggs in the slits and the young nymphs drop to the ground when they hatch. 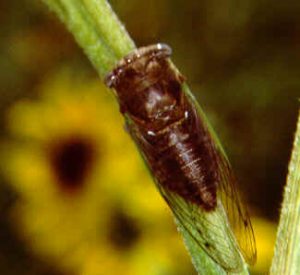 This cicada resembles the annual cicada, only smaller. It lives in the prairie. A keen ear will detect its song during the day as it tries to woo a female. Its buzz is one long note without the up-and-down variance in pitch that the Dog Day Cicada has. 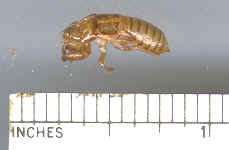 This cicada resembles the annual cicada, only smaller. It lives in the prairie. A keen ear will detect its song during the day as it tries to woo a female. Its buzz is one long note without the up-and-down variance in pitch that the Dog Day Cicada has.

This species of cicada (Tibicen dorsata) also prefers grasslands to woodlands. It is slightly bigger than the Dog Day Cicada and is marked in life with tan and black rather than green and black. Here you can see the difference in size between the forewings and hindwings which is typical of all cicadas.

A famous species of cicada is the Periodical Cicada (Magicicada septendecim). Slightly smaller than the Annual Cicada, it has bright red eyes and orange on the wings. Also note the dark "W" near the end of the forewing. 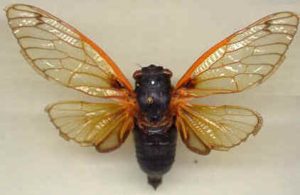 The Periodical Cicada emerges on either a 13 or a 17 year cycle.   The classification of the Periodical Cicada is somewhat controversial.   There are three different versions of the 17-Year Cicada and three of the 13-Year Cicada.  Some authorities name these as separate species.  Others call them all races or subspecies of M. septendecim.

Whether you will see any of them in a given year depends on the year and where you live.  There are 15 different year classes or Broods (12 of the 17-year and 3 of the 13-year) and their pattern of emergence has been studied since the 1890's.  The different Broods are designated with Roman numerals.  1998 was a big year for them in south central Kansas as Brood # IV (4) of the 17-Year Cicada made its emergence.   This is the only Brood that makes an appearance on the Great Plains, and they may be found from southwest Iowa to northeast Texas.  Look for them again in the year 2015.

For more information on the Periodical Cicada click here for a detailed web site from the University of Michigan.

Late in summer, as night falls, listen for the end of the cicada chorus. One by one, the males quit for the day and then you can hear the quieter night-calling insects such as crickets and katydids.  The relief we feel as the heat of the day subsides goes along nicely with the growing silence as the cicadas quit calling. 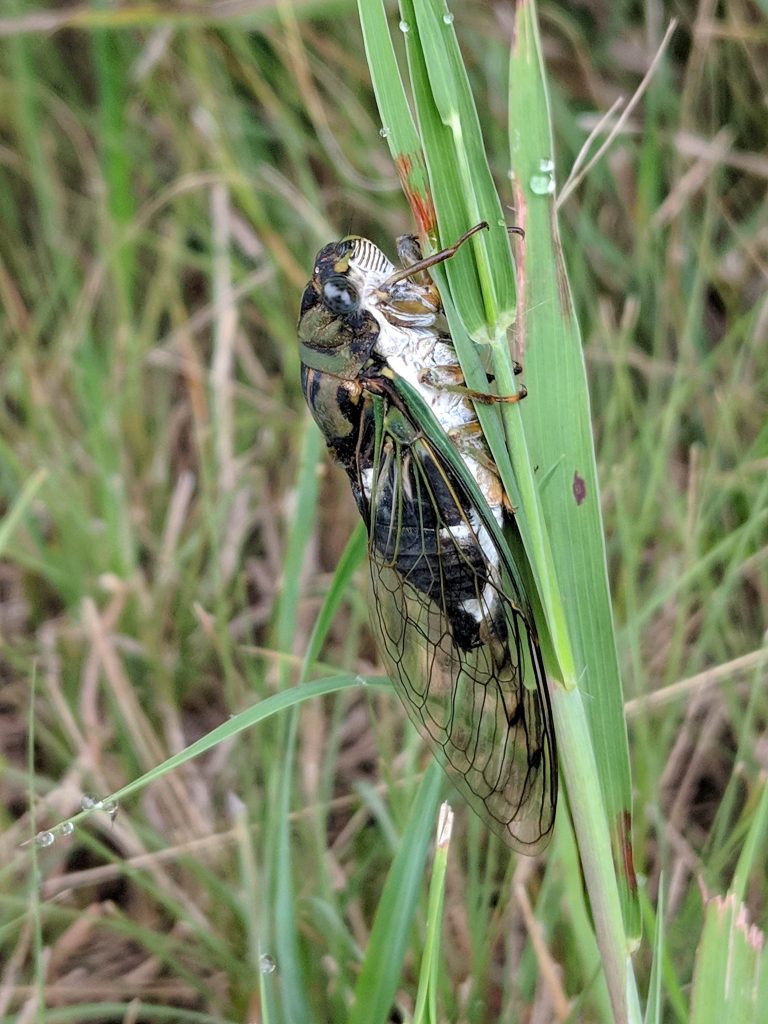