The white bark of the sycamore stands out,
even when seen from a distance.

While walking along a creek bottom in Eastern Kansas on a bright, sunny winter afternoon, your eye is drawn to a large white tree. Initially you think it is a dead tree with all the bark fallen off of it. As you get closer you realize the tree is very much alive, but its bark has a smooth, scaly appearance and is off-white in color. It is indeed a huge tree and its branches twist and contort into fantastic shapes. You notice the leaves on the ground and pick one of them up. It is broader than both your hands side-by-side. A slight motion halfway up the tree draws your eye to a hole in the trunk where a big branch used to be connected. You spot a drowsy raccoon just waking up and taking a peek at the world. You freeze so that it won't notice you. It makes a huge yawn, rests its chin on its front paws and closes its eyes again - not quite ready to begin its nightly foraging. You have found a sycamore tree.

The sycamore is not truly a prairie species. It makes inroads into the Great Plains along the river valleys of the eastern part of the area from Nebraska on south. It is a boundary marker in the ongoing struggle between the tallgrass prairie and eastern deciduous forest biomes. This millennia-old and never-to-be-resolved conflict between two plant communities depends on long-term rainfall patterns for its outcome. Prolonged wet cycles allow the trees to move west. Dry years favor the grasses. In the river valleys the trees always get an edge because of the extra moisture that is present, so the woodlands extend out onto the plains in slender fingers of riparian forest.

Indeed, the sycamore prefers deep river-bottom soils. In the Mississippi and Ohio River valleys, they may attain spectacular size - up to 175 feet tall and 14 feet in diameter! Individual trees may live over 500 years.

The leaves of the sycamore are very large, just like the tree.
They have numerous short hairs on the stem and veins, giving them a fuzzy feel.

Some leaves only have a hint of lobes. The picture shows the most typical shape.

The wood of the sycamore is hard and coarse-grained and often has a flaky appearance, which led to its nickname of lacewood. It gets used in cabinets, furniture, boxes and barrels. The native Americans would use the whole trunk of a tree to make dugout canoes. One of these was reported to have been 65 feet long and weighed 4 1/2 tons! 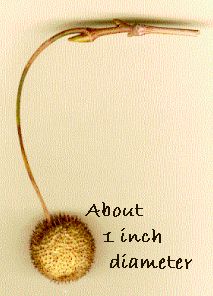 The fruit of the sycamore is a woody ball that ripens in October and persists through the winter, when it breaks up into many small seeds.

Each seed has a tuft of brown hairs that allows the wind to scatter it.

Sycamores have both male and female flowers, so every tree has fruits on it.

The name of the tree derives from the Greek sukomoros, which is a type of fig tree native to the Mediterranean. Evidently there is some similarity in the leaves, and this led to the transference of the name.

In cities, the London Plane Tree (Platanus x hybrida) is frequently used as a street tree. It is a cross between the American Sycamore and the Oriental Sycamore (Platanus orientalis). It is similar in appearance to the sycamore, but has smaller leaves and its fruits appear in pairs rather than singly. It is used in preference to the native sycamore because it is more resistant to a fungus called anthracnose blight (Gnomonia platani). The fungus attacks young twigs and leaves in the spring, causing them to die and fall off. Repeated attacks on a branch produce clusters of small twigs called witches brooms.

Not only raccoons, but also opossums, squirrels and wood ducks make homes in cavities in the trunk and major branches. The open branching pattern and sheer size of older sycamores creates good locations for Great Blue Heron nests. As a long-lived member of the riparian forest community in the eastern Great Plains, sycamores offer many opportunities to the native animals as well as an eye-catching accent on the landscape.