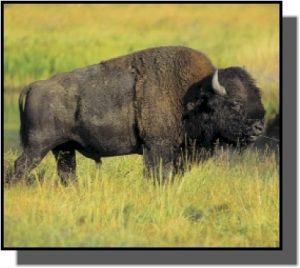 The most abundant grazing animal in North America was formerly the American Bison.  One estimate of the original number of bison in North America ranged as high as 70 million animals.  A single herd located southwest of what is now Dodge City, Kansas in 1871 was carefully estimated to have over 4 million members!  To see anything like this today one would have to visit Africa to see the large herds of grazing animals which still remain there.

Bison lived primarily on the Great Plains, but some herds were found as far east as the Allegheny Mountains in Pennsylvania and then south into the Carolinas.  The Continental Divide generally formed a barrier to their westward movement, but they were also found in the Great Basin and eastern Oregon.  They are also known to have occurred as far south as northern Mexico.

Their abundance on the Great Plains was nothing short of astonishing.  The first European explorers to see the Great Plains were overwhelmed by the spectacle of vast herds of bison stretching as far as the eye could see.  Their numbers were believed to be limitless, just as with the Passenger Pigeon and Whooping Crane, which brought them under the gun of the market hunters of the mid to late 1800's.  Between 1860 and 1880 the great herds that had formerly inhabited the prairies were ruthlessly exterminated in an orgy of slaughter that can scarcely be imagined.  By the turn of the century, less than 1,000 remained.  Only the actions of a few far-sighted ranchers and organizations such as the New York Zoological Society saved this magnificent creature from extinction.  Today, the species is secure.  In various public and private herds, it survives as a living emblem of the prairie.

Late summer is an important time for bison.  That is the season of rut, when the dominant bison bulls must re-establish their right to sire next year's calves.  There is much jousting and posturing between the dominant bulls and the lesser rival bulls and that keeps things hopping in the herd.  The calves, typically a single birth and occasionally twins, will be born in late spring.  The calves are a tawny brown color and can run with the herd within a few hours after birth.

The bison was chosen as the State Animal of Kansas in 1955.

Near Wichita, one can see bison at Maxwell Wildlife Refuge east of McPherson, the Konza Prairie south of Manhattan, the Tallgrass Prairie National Preserve near Strong City and at the Nature Conservancy's Tallgrass Prairie Preserve north of Pawhuska, Oklahoma.