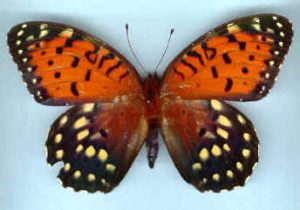 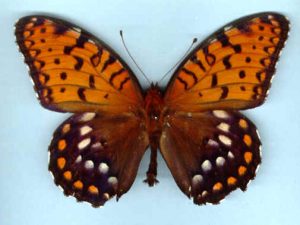 Known only from: The Tallgrass Prairie of North America

The Regal Fritillary is one of the most striking butterflies to be found on the prairie. As a large "orange and black" butterfly, it may be confused with the Monarch if seen from a distance. However, the hind wings are quite different - dark above and covered with large off-white spots below. Observed closely, the fore wings are distinctive also. The short dark lines running crosswise to the wing veins are not seen on Monarchs.

Males and females may be distinguished as follows:

The caterpillars of Regals, as is true of most fritillaries, eat only violets. In particular, Regals prefer the Birdsfoot Violet (Viola pedata) and Prairie Violet (Viola pedatifida). The eggs are laid in late summer. The newly hatched caterpillars overwinter and begin eating the following spring. They are black and yellow with short, branching, spiny hairs. The adults emerge in early summer and may be seen through September. Only one generation appears in a year. 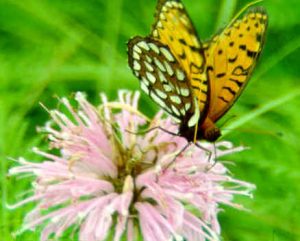 The known range of the Regal Fritillary originally stretched from Maine to Montana and south to Oklahoma and North Carolina. Because the caterpillars utilize the prairie species of violets, this species was never found outside tallgrass prairie.

Regals have almost disappeared from their former range east of the Mississippi River. They now occur only from southern Wisconsin west to Montana and south to northeast Oklahoma. Some relict populations occur in Pennsylvania and Maryland, but they may not last much longer. It is a species of concern for the United States Fish and Wildlife Service.

Why has the Regal Fritillary gone into such a sharp decline?

If you have Regals to watch, their behavior is quite interesting. The males will be zipping about looking for females, who will probably be either feeding, calmly perched somewhere down in the vegetation or, if they have mated already, moseying around laying eggs. If a male spots a female he attempts to win her favor. If he is an unwanted suitor, the female will fly rapidly upwards perhaps 100 feet in the air and then suddenly dive to the ground to shake him off. If she finds him to her liking, she will lead him in a short flight over the prairie to a suitable perch for mating. This is similar to the mating behavior of a lot of butterflies.

If you find the Regals feeding at flowers, they will be much more viewable. A slow, careful approach without sudden movements will get you almost nose-to-antenna with them or most any other butterfly. Using a good pair of close-focusing binoculars will allow you the same view but from a more comfortable distance for both you and the butterfly. Watch as they probe each flower for nectar with their proboscis. Look for interaction between them and other insects that come to the flowers. Butterflies can be quite pugnacious sometimes, and quite tolerant of other insects at other times.

Regal Fritillaries can be seen all summer long in the right habitat. If you see them, you know that you are in a high-quality tallgrass prairie - a remnant of what used to be the most extensive habitat type in North America, but which is now much reduced in area. Finding both together is a rare, precious and beautiful experience.