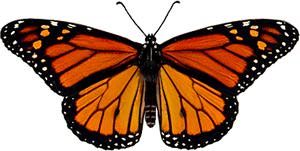 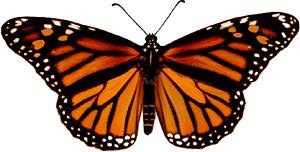 All photos courtesy of Monarch Watch

Favorite Winter Vacation Spots: The Transvolcanic Range in Mexico or the Pacific coast of California.

The Monarch butterfly is one the most readily recognized and beloved insects in North America. With its vivid orange and black markings and often bold behavior around people, it seldom fails to create a smile on the face of an those who see it.

In the images above it is easy to see the distinguishing characteristics of the species. Notice that the adult males have thinner veins in the wings and a large dot on one of the inner veins of the hind wing. Females have thicker veins and no dots. The dot is a scent gland. Males use the pheromones produced by this gland to make themselves attractive to females. 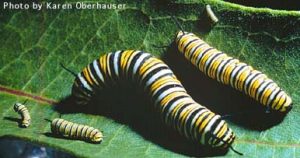 As a butterfly caterpillar grows it must molt its skin. Each stage between molts is called an instar. All five instars of the Monarch are shown in the caterpillar photo. From left to right, they are # 2 - 3 - 5 - 4 - 1.

The chrysalis, or pupal skin, of the Monarch is strikingly beautiful. It is vivid jade green with little golden bumps, particularly in the horizontal line visible about 1/3 of the way down from the top of the pupa. In the final day or two before emergence, the chrysalis becomes transparent, allowing one to see the orange and black wings beneath.

Some butterflies are very specific about where they lay their eggs. Monarchs will only lay their eggs on milkweeds. Milkweeds contain a potent heart poison, which helps to protect them from browsing animals and leaf-eating insects such grasshoppers. Monarchs are able to store this poison within their own bodies, making themselves poisonous in turn. They are very brightly colored, both as a caterpillar and as an adult, to advertise that they are not good to eat. Whenever an insect is brightly colored, rather than camouflaged to match its background, it usually means they have a secret weapon. It may be bad to eat, such as a Monarch, or it may have a potent defense, such as bees and wasps. It is not a perfect defense, however. Spiders, reptiles and certain mammals and birds are able to eat the Monarch without ill effect.

Since they are not warm-blooded, winter presents a difficult challenge for insects. The water in their body tissues would freeze as the temperature dropped, literally tearing them apart inside. Any overwintering insect must alter its body chemistry somehow so that this does not happen. Some butterfly species are able to overwinter in Kansas as either a caterpillar or pupa. A handful are able to overwinter as an adult. Many simply die and are replaced by migrants from warmer climates the next year.

Monarchs are unique in that they actually migrate south to a given overwintering site every year, much as many species of birds do. Unlike birds, the Monarchs who go south do not succeed in returning to where they were born. Rather, their children or grandchildren do - - - without any elders to show them the way. The innate ability of these small creatures to navigate across the continent has inspired and puzzled researchers for decades. Do they use the sun or the earth's magnetic field to find their way? Does daylength or temperature tell them to start? Do they use landforms such as rivers, coastlines or mountain ranges to guide them? When did they start this migration pattern anyway?

All of the Monarchs east of the Rocky Mountains are believed to overwinter on forested mountain tops in central Mexico within the Transvolcanic Range. Most of the roosts are located about 60 miles west of Mexico City. (This was not known to science until 1975!) All of the Monarchs west of the Rockies head for the Pacific coast, where they utilize groves of trees from north of San Franciso down to near San Diego.

The puzzle of the Monarch migration has inspired a program called Monarch Watch. Headquartered at the University of Kansas, it uses hundreds of volunteers across central and eastern North America to capture, tag and release Monarchs during the fall migration. If a tagged Monarch is later recaptured, the route taken by the insect can be used to better understand how they choose which way to go. Over 500 Monarchs tagged by Monarch Watch have been recaptured to date, building a database for researchers to use to understand the migration.

Visit Monarch Watch to learn more about the life cycle and natural history of the Monarch and how you can participate in the tagging program!

Keep an eye out during the month of September for the Monarchs as they head south. In south central Kansas, this usually happens around the middle of the month. In some years we see a lot, in other years not so many, depending on the weather patterns. If you are lucky, the migrants may make a temporary roost in your neighborhood and you may get to see, in miniature, what the winter roosts look like.

The fall migration of the Monarch butterfly is a hallmark of the season on the southern Great Plains. It is a reminder of the beauty and mystery that lies within the natural world.