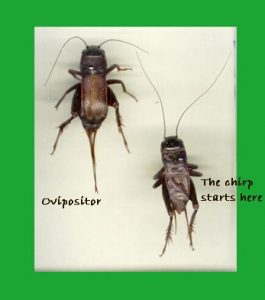 Crickets are familiar members of the insect order Orthoptera, which also includes the grasshoppers and katydids. Members of this order all have large hind legs modified for jumping.

Crickets become very noticeable in the autumn. As the days shorten and the temperature drops, they focus on laying eggs for next year because all the adults will perish come winter. Crickets use sound to find a mate and so the loud choruses of chirping males begin. Because they typically inhabit cracks and crevices, they often find their way inside our houses by exploring around the foundations and exterior doorways of our houses. The warmth within is agreeable to them and, as far as a male cricket is concerned, our houses are good echo chambers to make themselves louder!

After mating the female will look for a place to lay her eggs. The female uses her long egg-laying tube (ovipositor) to place her eggs one at a time in soil, decaying wood or other suitable medium. The baby crickets hatch the following spring. They undergo gradual metamorphosis, starting out as a tiny version of the adult and then going through about 10 molts before they reach maturity. This takes about 12 weeks, giving the potential to have two broods per year in Kansas. If conditions are favorable, that will result in lots of adult crickets in autumn.

While we often think of a singing cricket in the house as a nuisance, in the Orient it is considered a thing of beauty. A singing cricket may be kept in a fancy little cage much as a bird would be.

As the winter approaches, the annual cycle of insect activity on the Great Plains comes to a stopping point. In one form or another, they must hibernate through the cold months. The chirping crickets of autumn are just trying their best to make sure that plenty of their own kind will be there to greet the spring.

For more information on crickets, katydids and cicadas,
visit the Singing Insects of North America.