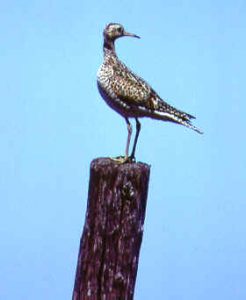 All photos by Bob Gress

Winters in:
The pampas (prairie) of Argentina

The Upland Sandpiper is the "shorebird of the prairie". While most of its relatives are never found far from water, this species has made itself at home on the grasslands. Of the 47 species of shorebirds known to nest in North America, only the Killdeer, Mountain Plover and Long billed Curlew have a similar strategy of nesting and feeding in upland prairie habitat. 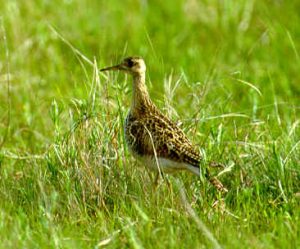 Formerly, the summer range of the Upland Sandpiper extended from Maine to Kansas and then northwest to Alaska. Recently it has suffered declines in the eastern part of its range but it is holding steady in the Great Plains.
Fragmentation of habitat is probably responsible for the declines. The Upland Sandpiper prefers grasslands of 40 acres or more and these have been disappearing rapidly in the northeastern U.S. due to old fields changing back to forest and suburbanization of the countryside.

In its habitat, it cannot be confused with any other bird.

-Killdeer are sometimes seen in the same area, but Killdeer have a bold black-and-white pattern on the chest and a cinnamon brown patch on the top side of the tail visible in flight.

-The flight of the Upland Sandpiper is very distinctive - with shallow, stiff, fluttering wingbeats.

-It often perches on fence posts or telephone poles.  After flying to the perch, it will hold its wings briefly above its body in a motion that looks like a stretch.

-The calls of the Upland Sandpiper are unmistakeable also.  A bubbling pip-pip-pip-pip along with the beautiful whr-r-reep, whreeeow [like a "wolf whistle" played through a bubble pipe] fill the prairie skies from May to July in the breeding territory. 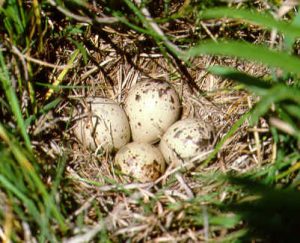 It is very difficult to find an Upland Sandpiper's nest. They are notorious for sitting tight on the nest, so if you do not see one go to its nest, you may never find it by walking around in the habitat.

A researcher succeeded in finding a nest once and grabbed the female to put a band on her leg. Afterwards, she merely stood up on his hand and scolded him before calmly hopping down and returning to the nest to finish hatching her eggs!

One interesting facet of their breeding behavior is that they form loose colonies and appear to synchronize their hatching cycle.

The young are long-legged like their parents and can follow them around within two days after hatching. Only one nest is made each season and there are 4 eggs per clutch. The young are fledged by the time they are a month old. The birds begin their trek back to South America soon afterwards, and practically all of them have left on their southward migration by the end of August.

A summer day on the prairie offers a modest but very satisfying program of natural music. The sound of the wind in the grass along with crickets, grasshoppers, cicadas and other insects make up the basic soundscape. But only a few larger animals will be heard. If you are near water, you may hear a breeding chorus of frogs or toads. Otherwise, only a few birds - Dickcissels, Grasshopper Sparrows, meadowlarks and Upland Sandpipers - will add their flourishes, and the Upland Sandpiper is by far the most melodic of those. Spend some time exploring a summer prairie and enjoy the concert!